Skip to content
Date: August 1, 2013Author: Farmers Trend 25 Comments
When an advert appeared on the Daily Nation in October 2011 for dairy cows selling at not less than 140,000 shillings, no one could have imagined that the one behind this dairy farming success story of Eden Farm, Limuru, was a 26-year-old IT graduate. Yes, at such a young age, Mr. Douglas Kanja had managed to develop his passion into a lucrative business that earns him an average of 1 Million shillings a month, all the time maintaining a fulltime job. While Eden farm thrives in Limuru, Mr. Kanja works in an IT in Nairobi, more than 30 kilometres away.

So how did Eden Farm come to be?

Dairy farming is something that is more of a passion for Mr. Kanja than a business. IT is his job but farming is what he loves. He started pursuing his passion in the year 2008. He visited KARI offices in Naivasha to carry out a feasibility study on how best to run the venture. 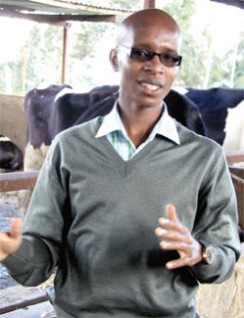 There, he was given a list of 24 farms that he could visit to learn the success secrets of dairy farming. From the farms, he was referred to other farms and he ended up visiting a total of 64 farms.
At the end of it, he was certain that dairy farming was what he wanted to do. With that, he set out to establish Eden Farm that now rakes to the tune of 1 million shillings every month.
Using 600,000 shillings he got from his IT job, Kanja bought 3 Friesian cows from Nakuru, Naivasha and Eldoret.  This cost him approximately have the capital and he used the rest for construction work. Currently Eden Farm occupies 2 acres of the 20 acres owned by his family at Limuru and the number of animals has increased to an impressive heard of 170.
How does Kanja balance between a fulltime job and a farming business?
For Douglas Kanja, a typical day starts at 4am. At this time, he drives to the farm in Limuru where he spends an hour ensuring that all is well with the animals and meeting with the workers to plan the day’s activities. At about 6am, he leaves for Nairobi where he works up to about 5pm. He then drives back to the farm to review what went on during the day. This he does to around 8 in the evening when he finally takes his time off to get the much deserved rest. Clearly, Kanja’s dairy farming success story tells of one whose passion is the main drive to what he does.
What dreams does he have for Eden Farm?
Mr. Kanja is surely far more ambitious than most young men his age would dare be. He aims at increasing the number of animals at Eden farm to 1000 dairy cows, preferably Friesians. These will be high grade cows, each with the ability of producing 60 litres of milk per day. To achieve this, he plans to utilize the embryo transfer technology. He will be importing embryos from USA, Canada and UK.
What does he attribute his success with dairy farming to?
Kanja observes that the major setback that dairy farmers in Kenya face is the unpredictability of milk prices and the cost of dairy feed. To overcome this, Eden farm has been selling all his milk to Brookside Company, which shields him from the price fluctuations. He also produces dairy feed right on the farm using maize meal and other a mixture of several other ingredients including silage which is also produced at the farm.

That is the success story of a self made millionaire under 30 who has made the fortune from dairy farming. He has done all this while still doing what most youths think is the only means to a decent livelihood; having a white collar job.

ITS REALLY COOL TO DO FARMING

25 thoughts on “Eden Farm Limuru: From 3 Cows to Making an Average of 1 Million Shillings A Month”